Originally crafted in Germany, this now South African produced wine has had a long life journey.

Originally crafted in Germany, this now South African produced wine has had a long life journey.

In the beginning it was mixed with Burgundles already opened Champagnes, the mixture known as Kalte Ende or cold end.

This practice ensured the Champagne was not wasted once opened.

The taste is sweet on the lips and in the mouth and surprisingly dry on the finish. A wealthy American then moved the concept to America where it was a huge success – but he translated the name wrong!

This is where COLD DUCK first got its now well-known label.

With a second fermentation put in place to create a sparkling number, the wine became a winner.

It was then named 5th Avenue Cold Duck – an attractive name that swept the market quickly.

A blend of selected red and white sparkling wines. 5th Avenue is a sophisticated, pink, fun sparkling wine with a unique taste and a sexy image. It has a low alcohol content of 8,5%.

It can be described as a heady pineapple fragrance from Ferdinand de Lesseps grapes, combined with a candy floss scent from Pinotage grapes, with a charming, gently sweet carbonated sparkle.

The taste is sweet on the lips and in the mouth and surprisingly dry on the finish. This has now been produced in South Africa for more than 30 years. 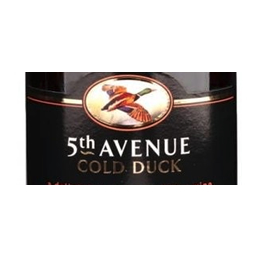