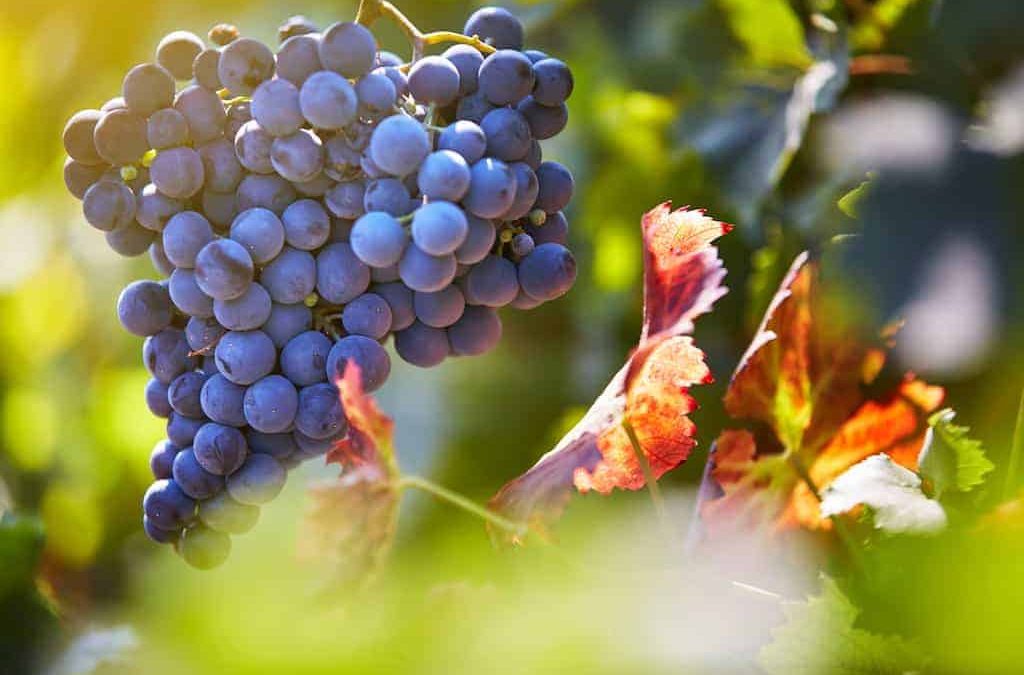 Syrah grapes are an offspring of two ancient varietals. It was created when Dureza, a dark skinned berry was crossed with Mondeuse Blance, a white skinned grape. This is thought to have first occurred on the west bank of the Rhone.

The pairing is interesting as neither grape ever gained mass popularity before they were crossed. Both berries were planted in the Northern Rhone Valley, which is the home of Syrah. Dureza and Mondeuse Blanche remain obscure and seldom seen today.

The discovery of the Syrah grapes origins came from extensive research conducted at UC Davis. The research was headed by Carole Meredith, who owns Lagier Meredith wines in Napa, which produces wine from Rhone varieties like Syrah Grapes. 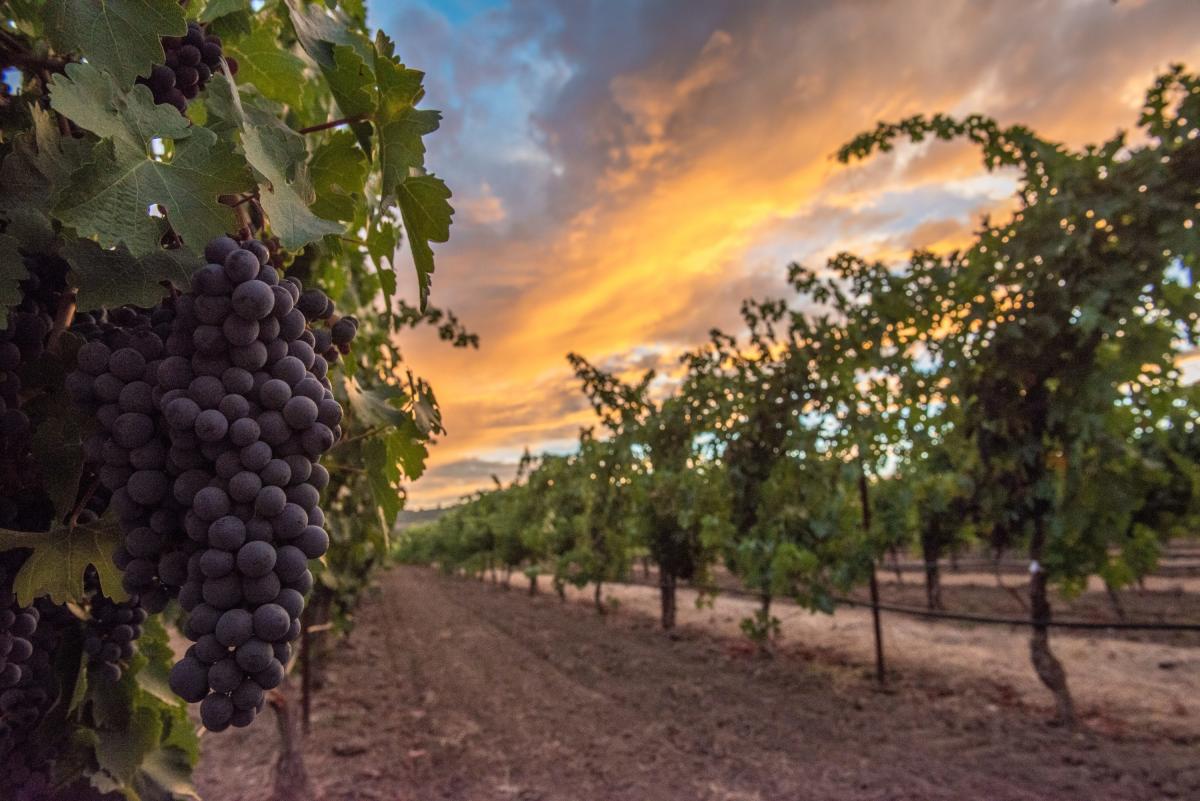 How long Syrah grapes have been in existence is not known with any degree of accuracy. It is quite possible the ancient Romans planted the fruit in Vienne, which we know as Cote Rotie today. At the time, according to writings from Pliny the Elder, the vines were called Allobrogica.

Today Syrah is ranked as the world’s 6th most planted grape. But that has not always been the case. During the 1800’s, Syrah started becoming more prevalent in the Rhone Valley and the Languedoc Roussillon area. But the true explosion in Syrah started slowly taking off in the 1960’s. 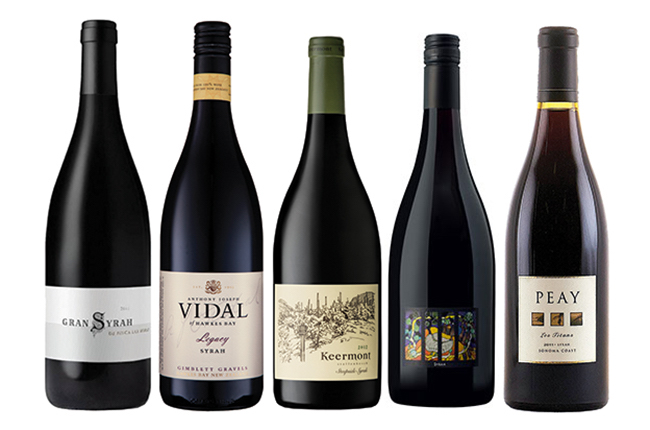 Syrah is perfect for a wide and diverse array of wine and food pairings. Syrah is often the best wine for all types of roasted, grilled or smoked meat dishes including duck, beef, veal, sausages, grilled meats, barbecue’s and chicken dishes. Syrah based wines and game make a perfect wine and food pairing.

Syrah also makes a great wine and food match with rich braised dishes and stewed meats. Syrah is for many people the only wine that works with numerous, winter comfort dishes like cassoulet, grilled steaks and good old fashioned hamburgers. Syrah can also be easily paired with a myriad of different hard and soft cheeses. 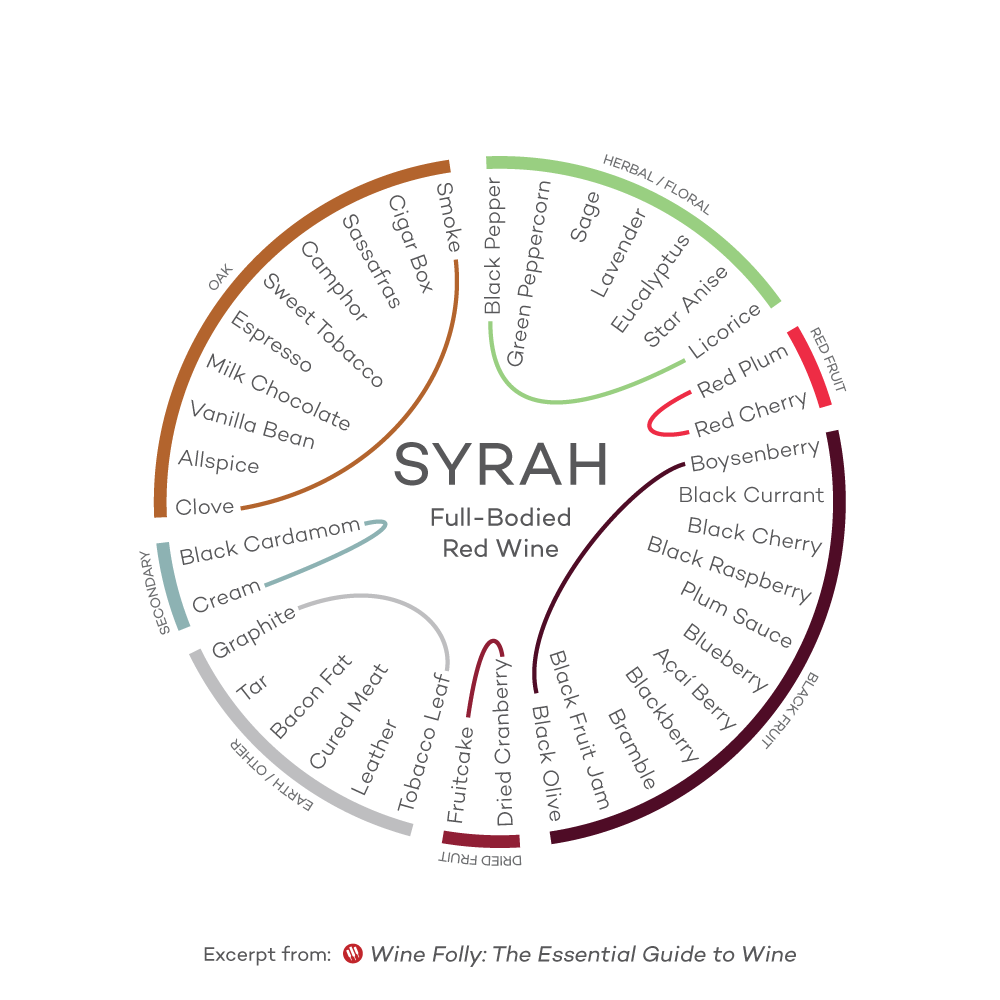 Syrah is a small, dark skinned berry that grows in small bunches. If you look closely, the grape takes on a shape that resembles an egg. The grape produces naturally high, but not too high, acidity and tannins.

Syrah ripens best in dry climates in terroirs and soils that allow for deep root penetration. The grape is somewhat hardy, but it is susceptible to coulure after flowering as well as attacks from mildew and oidium.

Syrah produces deeply colored and concentrated, rich, red wines with the ability to age and evolve for years or multiple decades in the best cases.

Typical scents and flavors include blackberries, plums, black cherries, flowers, spice, earth, chocolate, licorice, blueberry, cassis, pepper and truffles. Many of these secondary qualities develop as the wine ages. Syrah grows well in a myriad of terroirs and soils.

However, the grape seems to perform best in the steep, rocky hillsides found in the Northern Rhone Valley, which are filled with gravel, schist, limestone, iron, granite and sandy soils.

Wines made from Syrah have been popular for centuries with collectors all over the world. Thomas Jefferson, the third president of the United States raved about the wines of Hermitage in his diary.

In fact, in the early 1800’s, Hermitage was the most expensive wine in the world. An advertisement from the famous Nicolas wine merchants in Paris from 1821 offers both red and white Hermitage at prices higher than any Burgundy or Bordeaux wine!

During the 18th and 19th century, Bordeaux merchants would blend portions of Hermitage to give more backbone to Bordeaux wines. Some negociants offered this custom service to select clients.

The wines were ordered as Bordeaux plus. As a homage to those wines from previous centuries, Chateau Palmer produces a wine in certain vintages that blends about 15% Syrah with their Margaux wine. Jaboulet, the famous wine of Hermitage has also been producing wines that blend fruit from their vineyards with grapes from Chateau La Lagune, their sister property in Bordeaux.

The grape is also known as Syrah in South Africa.

Syrah may have arrived on South African shores in the second half of the 17th century, but it’s only recently that it has emerged as the Cape’s most exciting red grape, with 10% of plantings and increasing. The Cape has a Mediterranean climate, so even its cooler sites, located at altitude or close to the Atlantic or Indian oceans, are warmer than the northern Rhône. And yet many of the best wines display the pepper spice, tapenade and blackberry notes that are so typical of that famous French valley.

South Africa makes Syrah in all of its major growing regions. The most elegant wines come from Elgin, Constantia, Cederberg, Malgas and Cape Agulhas, but don’t write off the richer styles produced in Stellenbosch, Paarl, Wellington, Franschhoek, Tulbagh and the Swartland.  These result in surprisingly more refined and complex Syrah’s. 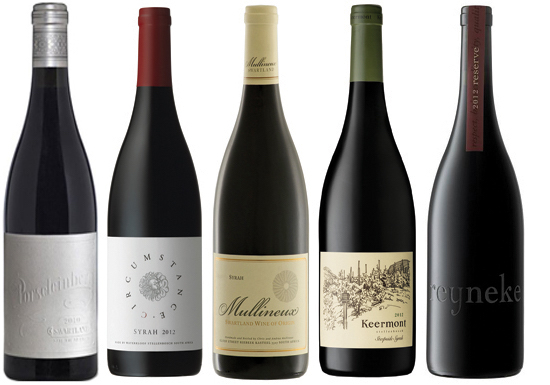 When it comes to Australian wine, Shiraz leads the way. Almost universally planted, capable of everything from affordable, quaffable BBQ reds to magnificent, age-worthy classics that are truly world-class, Shiraz has it all.

Shiraz is Australia’s stable red grape variety, makes the most popular red wine and is at the core of the country’s incredible export success. The most widely planted wine grape in the country, Shiraz continues to dominate the Australian wine scene with its bold, ripe flavours and easy-drinking nature. A dedicated band of winemakers are ensuring that Shiraz is known for quality rather than quantity by bringing back traditional, hands-on winemaking that is creating Shiraz with distinctive character and personality. By virtue of its capabilities, army of winemaking advocates and consumer adoration, Shiraz is something special.

The first Shiraz vines made their way to Australia in James Busby’s 1832 collection. Recognised as the father of Australian wine, Busby travelled through Spain and France collecting vine cuttings that were the foundation of the Australian wine industry. The first wines to come from these cuttings were labelled ‘Hermitage’, or rather more curiously, ‘Claret’ or ‘Burgundy’, by bin numbers or with other generic, non-varietal descriptors. Australia adopted the name Shiraz in the mid 19th century and soon popularised it as an internationally accepted term for the variety.

To ripen fully Shiraz needs a warm growing season, however, the most aromatic, elegant styles are grown in regions with cool nights and high diurnal temperature ranges – such as the Canberra District, Adelaide Hills, Mornington Peninsula and the Yarra Valley.  In warm to hot regions, Shiraz shows greater jammy, blackberry and plum fruit characters and less of the delicate aromas that are the hallmark of the premium styles.

As with most red wine grapes grown in the early 19th century, Shiraz was historically used for blending, often with Grenache, Cabernet Sauvignon or Mataro (Mourvedre), rather than to make single-varietal wines.  Shiraz quickly became a significant part of the output from the Hunter Valley, parts of Victoria (Geelong, Bendigo, Rutherglen, Ballarat, Glenrowan, Yarra Valley) and South Australia (Barossa, Clare Valley, McLaren Vale, Adelaide Hills and Coonawarra). Led by pioneer winemakers such as George Wyndham, Henry Lindeman, William Angove, Joseph Seppelt and Thomas Hardy, wines made with a high proportion of Shiraz found their way onto tables in Australia, Britain and Europe, to widespread acceptance and critical acclaim.  Australia’s export industry waxed and waned in the following decades, eventually experiencing a decisive resurgence in the 1980s and ’90s.