Sam Dunlevy started on the wine path at a young age, with his parents planting a vineyard on the farm he grew up on, in Willunga. He was 12 at the time, with it having significant enough influence to see him embark on his winemaking degree at the tender age of 17. He graduated from The University of Adelaide in 2003, then embarked on a seven-year practical apprenticeship at home and around the globe, with stints in New Zealand, Canada and multiple vintages in Spain, as well as at McLaren Vale stars, Kangarilla Road, Gemtree and Wirra Wirra.

In 2011, he took on a winemaking role with McLaren Vale’s Fuse Wine Services, with duties split between commercial winemaking and managing a 150-tonne winery focused on small batches. During his time there, Sam developed a deep interest in alternative varieties and an experimental approach, which led him to pursue his own brand in 2017.

In 2015, Sam together with partner Chloe bought a property in the laid-back town of Sellicks Beach, SA, which included an old church that was built in 1862. This was the start of the Berg journey for them. Working on getting the brand and label up and running and then converting the church into a cellar door where today you get to experience exceptional wines with a beautiful view of the ocean.

Berg Herring is a McLaren Vale label focused on the future, with a deep investigation into heat-tolerant Mediterranean varieties that are thriving in the warming climate, and a style built around earlier picking and minimal intervention to fashion fruit-forward wines that are pitched for wine drinkers – Dunlevy included – who are increasingly embracing bright styles made for earlier consumption.

Sam is focused on the potential future star Vale varieties, with Fiano, Nero d’Avola, Vermentino and Touriga key drivers – and Saperavi and Barbera featuring in a blend – not ignoring the incumbents, with a straight Shiraz, Grenache and Shiraz blend, and a grenache rosé also in the Berg Herring stable. He does not stick to any rules in the making of his wines he always says. “I try to be as minimal as possible with intervention and additions, making wines they are fruit forward and balanced, technically sound but have enough interest to give some personality. I am trying to make the best wine possible and work with what is in front of me to achieve this. Hand-picking at lower Baume with good acid alleviates the need for heavy handed treatment; 100 per cent whole bunch fermentation is also an important part of my reds, but I always press off stalks before the alcohol passes 10 per cent, otherwise bunchiness dominates the fruit.” – Sam

Sam’s focus is on emerging varieties in McLaren Vale. 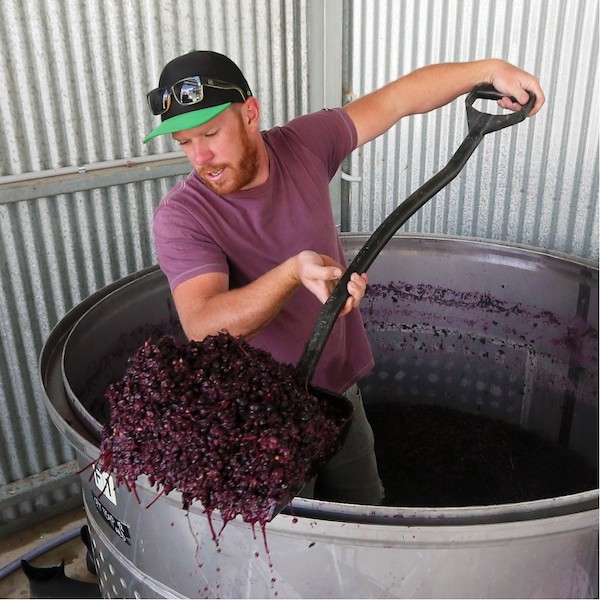 There are no preconceived ideas about how alternative wines should look in Australia, so they are an opportunity to make wines in a fruit-forward style, geared toward early consumption. Wines he loves to drink.

He believes they are also the future, the varieties that we will see coming to the fore as climate change makes for harsher growing conditions. Varietals like Vermentino, Fiano, Nero d’avola and Touriga are proving to be bulletproof in the warm dry climate.

The Young Gun of Wine Awards has been an important initiative on the Australian wine scene since its inception in 2007.

Now in its 15th year, the awards recognize Australia’s most exciting emerging winemakers!

Nominated for the 2021 Young Gun Winemaker of the year award Sam is under the finalist to take to prestigious award this year!