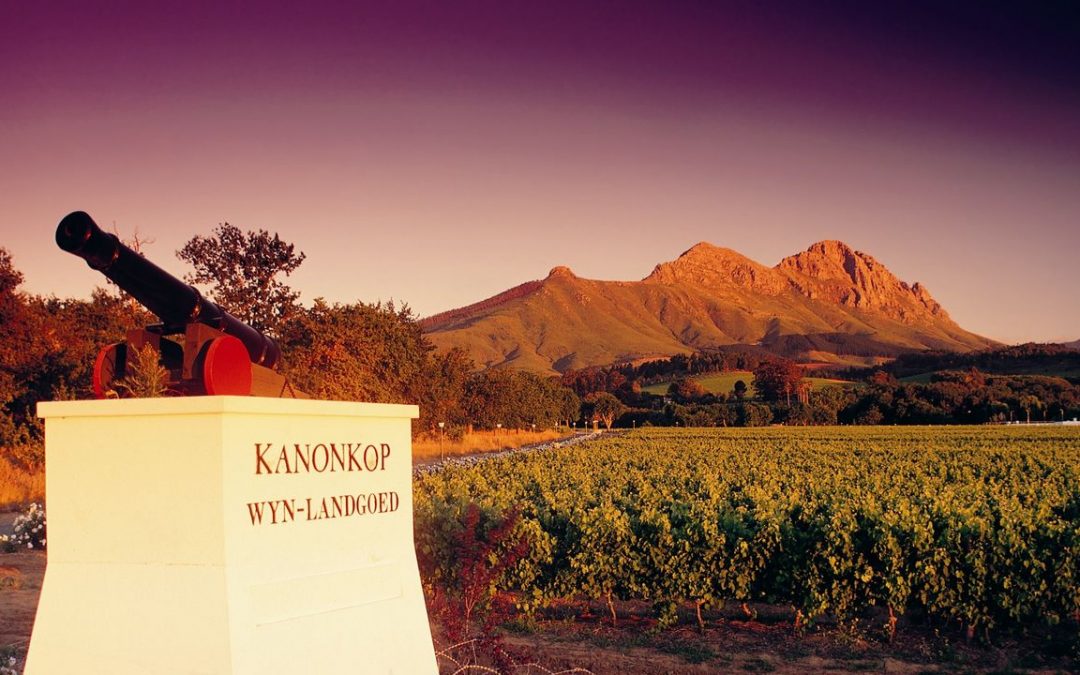 This South African winery is a place of natural beauty where hospitality, family values, tradition, history, and interesting characters are as integral to our ability to create magnificent wines as the ancient, decomposed granite soils, the cool air from the Atlantic Ocean and the old dryland vineyards.

Kanonkop Wine Estate has been making wine under its own label for less than 50 years, but in that time, it has gone from a workhorse of South Africa’s wine scene to a leading light.

Situated in the Simonsberg region of Stellenbosch, was founded in 1929 – although the first wine bearing the iconic label did not debut until 1973. In the near half-century since, it has become internationally renowned. And the reason for its pre-eminence sits firmly the founder, Paul Sauer.

The name Kanonkop is derived from a hillock (kop) on the Simonsberg mountain above the wine estate from where, during the 17th and 18th centuries, a cannon (kanon) was fired to announce the arrival of sailing ships entering Table Bay.

The roar of the cannon would be the signal to local farmers, who were waiting to make the 50-kilometer journey to the harbour, to load up their wagons with fresh fruit and vegetables to barter their produce.

He established the vineyards on Kanonkop and oversee the estate’s foray into winemaking, but as a member of the South African parliament for over 40 years, he went to great lengths to promote the country’s wine industry and to help establish a wine culture in South Africa. 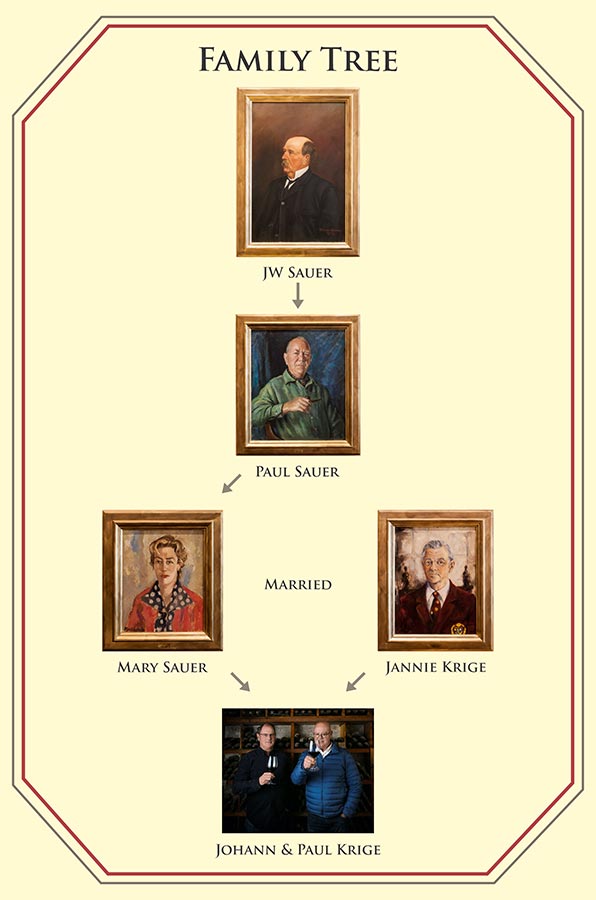 Sauer was the son of politician, JW Sauer, who served in the parliament of the Cape Colony, as well as raising fruit and wine grapes on the Uitkyk farm, which sits directly above Kanonkop and is now the wine estate. After his death, Uitkyk was sold by JW’s widow Mary, and an unfarmed spread of land on the lower slopes of Simonsberg was left to her only son, Paul. The young Sauer named this 125ha farm Kanonkop – ‘cannon hillock’ in Afrikaans, referring to the butte above the farm where in the 18th and 19th century a cannon had been mounted.

The Estate has been handed down from generation to generation and is now in the hands of brothers Paul and Johann Krige.

When Paul Krige came to work on the farm in 1984, it was very far from being the leading light of the South African wine industry that it is today.

Its position today is largely down to human intervention – in this case, in the form of Paul’s older brother, Johann. The law graduate called a meeting with his parents, his brother and Kanonkop’s then winemaker Beyers Truter. He observed that the plantings – only a fifth of which went into the estate label – were ‘all over the place. The farm was planted to Pinotage, Cabernet Sauvignon, Riesling, Clairette Blanche, Sauvignon Blanc, Pinot Noir.

Kanonkop is now into its fifth generation: Johann’s daughters Helene, 35, and Marcia, 31, and Paul’s son Sauer, 27, and daughter Suzaan, 25, are waiting in the wings. Helene and Marcia are raising young children. 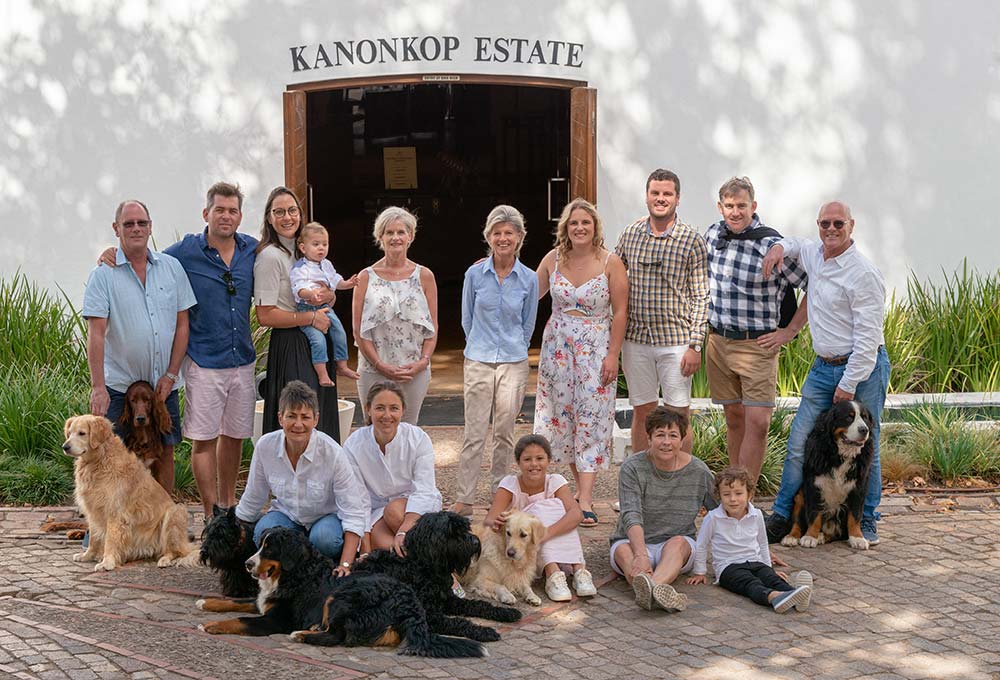 At the 1991 International Wine and Spirits Competition in London, history was made when the Kanonkop Pinotage received the Robert Mondavi Trophy as the Best Red Wine and Beyers Truter, then the winemaker at Kanonkop, was nominated as International Winemaker of the Year

Kanonkop’s vineyards are situated between 180m and 365m above sea level.

The topography of our vineyards will cause conditions to cool or warm as the slope, mountain or flat patch of soil exposes its plants to varying air flow and sunshine.

The classic approach to winemaking at Kanonkop is underscored by the emphasis on vintage.

On this unique piece of Stellenbosch terroir, no year in the vineyards is the same. The focused and site-specific approach to winemaking, which has been at the heart of the estate since the first vintage, ensures the character of each year is captured, its climate and ecological vagaries allowed to express themselves in the wines.

Kanonkop is home to the legendary Kanonkop Paul Sauer 2015 that has become the first South African wine to receive 100pts in the annual report on the South African wine industry by respected British wine judge, journalist and critic Tim Atkin MW. Amazing milestone for Kanonkop and South Africa.

The people of Kanonkop make it what it is. They are not just workers or employees – they are the Estate.

Today Kanonkop is a Kanonkop beacon, an institution, and a leader in the South African wine industry.