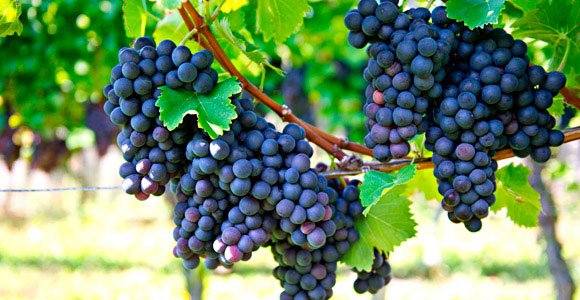 Petit Verdot first gained fame as a blending grape for making Bordeaux wine. However, because Petit Verdot often has difficulties reaching full phenolic ripeness, not much of it is planted or used in Bordeaux today. Yet, that was not always the case.

In fact, Petit Verdot, which takes its name from the small size of its berries, was one of the more important grapes for many Bordeaux chateaux in the Medoc during the 1700s. However, quite a bit of Petit Verdot in The Left Bank was removed after the devastating attack of phylloxera in the late 1800s.

Today, Petit Verdot is more popular in the Medoc than across the river. Not much of the grape is planted in the Right Bank. 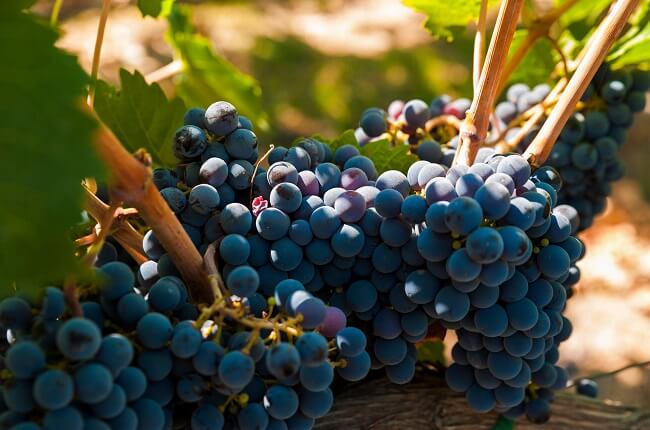 It seems to do best in the warm, well-drained, gravel-based soils found in the Left Bank. Interestingly, Petit Verdot has a unique characteristic not found in most grape varieties. Petit Verdot produces more than two clusters per shoot. The grape is much older than Cabernet Sauvignon.

What little Petit Verdot remained was once again removed from the vineyards in Bordeaux following the frost of 1956. Petit Verdot began to reappear in California in the mid-1970s. Most of those vines came from older plantings placed in vineyards located in the Mt. Veeder appellation.

Petit Verdot is an ancient but relatively obscure red wine grape. Petit Verdot is planted in small amounts in the Bordeaux region of France to add color and tannin to red Bordeaux blends but is rarely bottled on its own. This may be changing, as the grape is being rediscovered by some new world winemakers, who are eager to explore what it is like when allowed to stand on its own as a single varietal wine.

If you like your red wines so densely tannic you can practically chew on them, try wines made from Petit Verdot. This French grape delivers powerful structure along with new oak richness and pretty blueberry fruit, usually at a remarkably reasonable price. In its homeland of Bordeaux, Petit Verdot plays a role in red Bordeaux blends, where one to three percent Petit Verdot in the blend lends complexity and color. Petit Verdot is unrelated to cabernet sauvignon but is often blended into Cabernet Sauvignon-based wines to add tannin and color. They favor the same climate and gravelly soils and are often grown in the same areas. 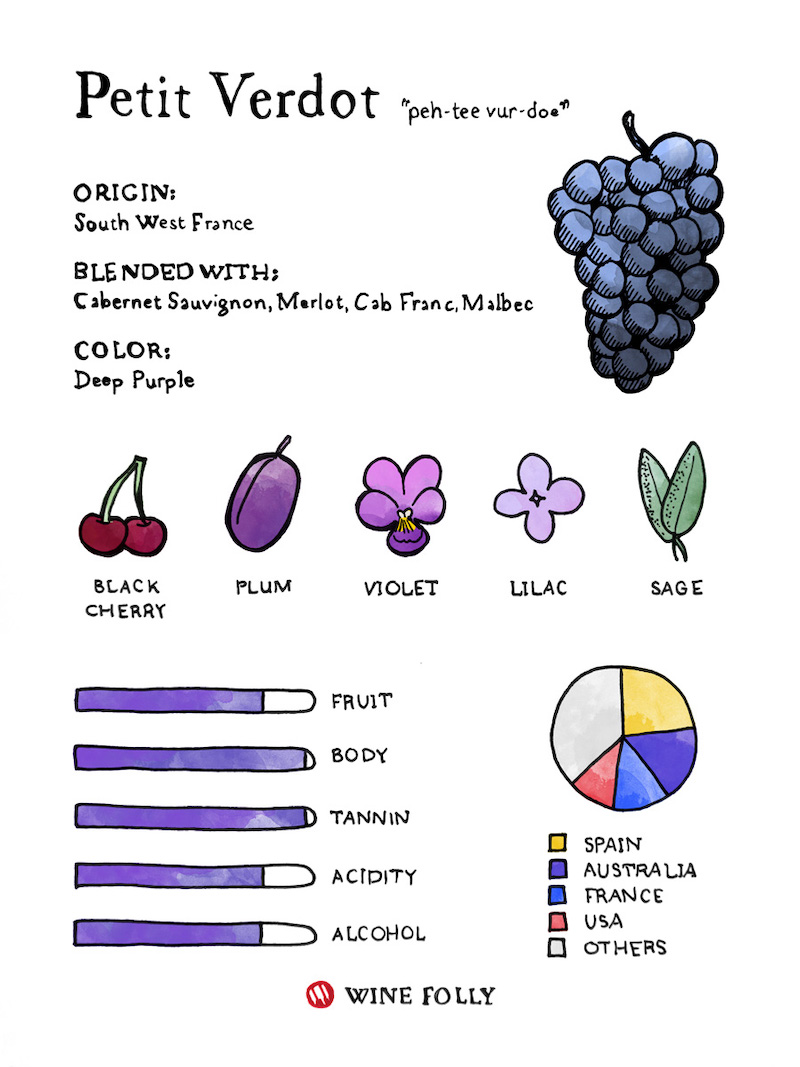 In the New World, Petit Verdot is used in Bordeaux-style blends, which are often labeled “Meritage” in the United States. New World winemakers also produce red wines made from 100% Petit Verdot.

When Petit Verdot is added to the blend, due to its thick skins and natural acidity, it helps bring additional tannins, color and freshness, along with a spicy character.

It is a late-ripening grape, which means that it must be harvested after other Bordeaux grapes, like Cabernet Sauvignon, Cabernet Franc, and Merlot. Even then, Petit Verdot often fails to reach full ripeness in Bordeaux. In warmer climates where it can fully ripen, Petit Verdot expresses itself with floral, black fruit, herbal notes, and gravelly minerality. Wines made from this grape are quite tannic and rich in color and body.

Where Does Petit Verdot Grow?

Petit Verdot enjoys the cool temperatures of the maritime climate of Bordeaux in France, but it often struggles to achieve full ripeness by the time the other grape varieties that make up Bordeaux wines are ready for harvest. In this region, Petit Verdot grows best in well-draining gravel soils like those found on Bordeaux’s Right Bank.

Petit Verdot grows well in Australia’s warm climate, especially in Queensland, the Barossa Valley, and South Australia. As a varietal wine, Petit Verdot is made in Australia in a lighter-bodied style, with notes of blueberry and black raspberry. 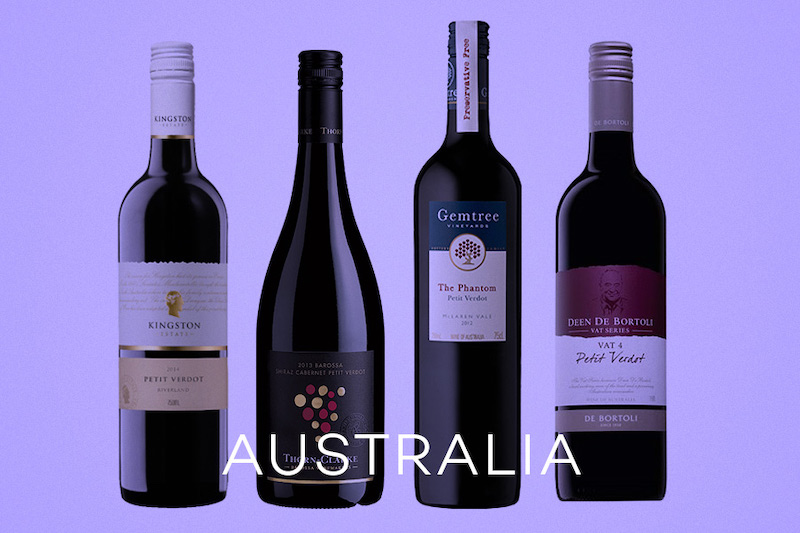 Bordeaux-style blends have been popular in Argentina for a number of years, and some producers are bottling varietal Petit Verdot wines there, hoping to emulate the success of Malbec, another Bordeaux grape has success there.

California devotes many acres in the Napa Valley and Central Coast to producing Petit Verdot. California Petit Verdot is used both for blending with Cabernet Sauvignon and as single varietal wines that are often aged in new oak for a more softly tannic style.

Plantings of Petit Verdot vines have grown significantly since the 1990s, with South Africa boosting nearly 750 ha under the variety in 2016. The variety is planted in all the wine production regions of the country, with Stellenbosch boosting the largest area under production, followed by Paarl and Robertson. View more South African Wines. 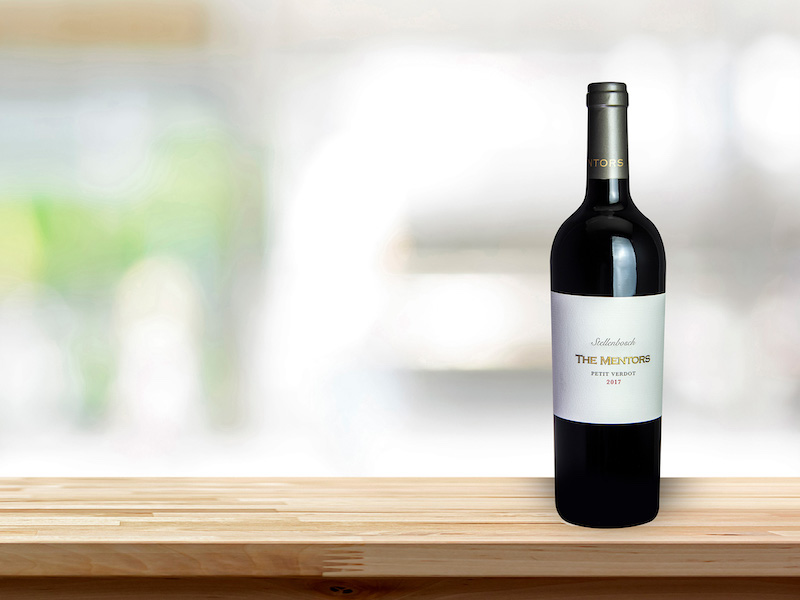